Secure and regulated environments or government agencies under the stringent effects of HSPD-12 and FIPS201 compliances may be required use multi-factor authentication to access network infrastructure. For most, that means providing a form of physical authentication such as a Common Access Card (CAC) or Public Identity Verification (PIV) card for logging into computers and accessing network resources.

This presents a challenge to challenge to IT support staff needing to access to support remote machines as it may require a desk-side visit. 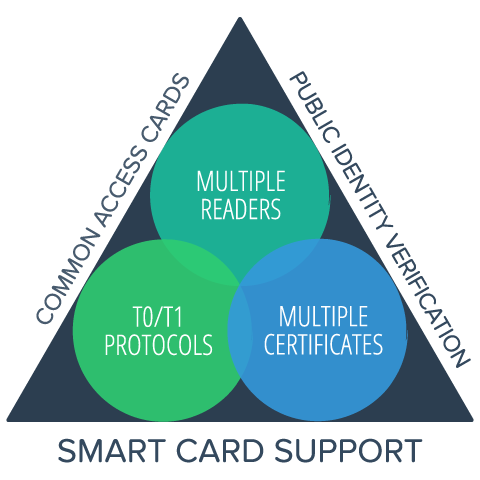 Remote control solutions are commonly used tools to assist a remote user or to remote administer a server. Without the ability to remotely authenticate on a computer, a remote control solution becomes inoperable. Microsoft RDP provides basic smart card redirection support, however, it forces exclusive access to the client session making it more challenging to support your end users.

Federal Information Processing Standard 201 (FIPS 201) In response to HSPD-12, the National Institute of Standards and Technology (NIST) Computer Security Division initiated a new program for improving the identification and authentication of Federal employees and contractors for access to Federal facilities and information systems. Federal Information Processing Standard 201 (FIPS 201) was developed to satisfy the technical requirements of HSPD- 12, approved by the Secretary of Commerce, and issued on February 25, 2005. FIPS 201 specifies Personal Identity Verification (PIV) requirements for Federal employees and contractors.

Smart card VS CAC vs PIV

Smart Card - A smart card is a credit card sized card that has an embedded microchip and one or more certificates. The information on the card identifies the user and includes the user’s private key used for asymmetric cryptography.

Both a CAC and PIV provide the same benefits of a smart card, but also include photo identification.

CAC - A common access card (CAC) is a smart card used by employees and other personnel in the United States Department of Defense (DoD). A CAC includes a picture of the user along with other information such as their name. DoD employees wear the CAC as a badge and can show it to guards to prove their identity. They can also use it as a smart card to log onto systems. PIV - A personal identity verification (PIV) card is also a specialized type of smart card used by personnel in United States federal agencies. Just as a CAC does, the PIV card includes a picture of the user along with their name. A PIV can be used for visual verification of users, and then as a smart card when users log onto their computer.

Supports both RSA and ECC Certificates

Encryption with RSA has been the industry standard for decades, and although RSA certificates offer more than sufficient security, experts predict that Elliptic Curve Cryptography (ECC) will eventually replace it as the new standard, offering faster encryption speed with smaller certificate size. Goverlan Remote Control is compatible with both.