The Goverlan Reach Server can be used to completely host and distribute Goverlan licenses on premise.

This is primarily used if internet access is completely unavailable in the environment that will be managed by the Goverlan Reach Consoles. 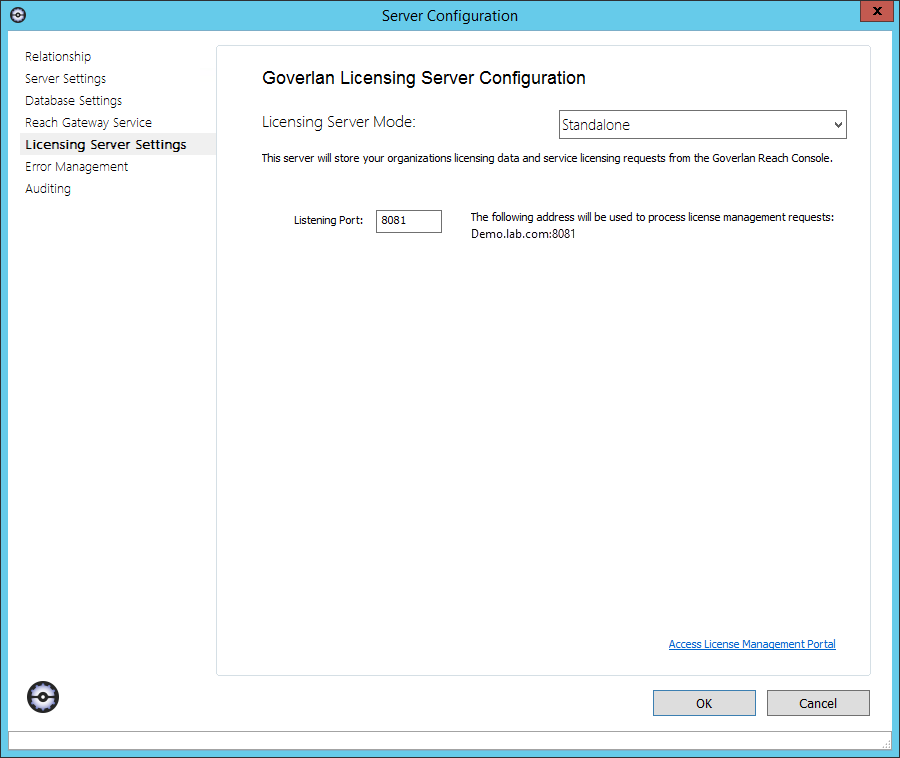 Now that the Standalone Licensing Services have been activated, a pool of licenses will need to be assigned to the server. 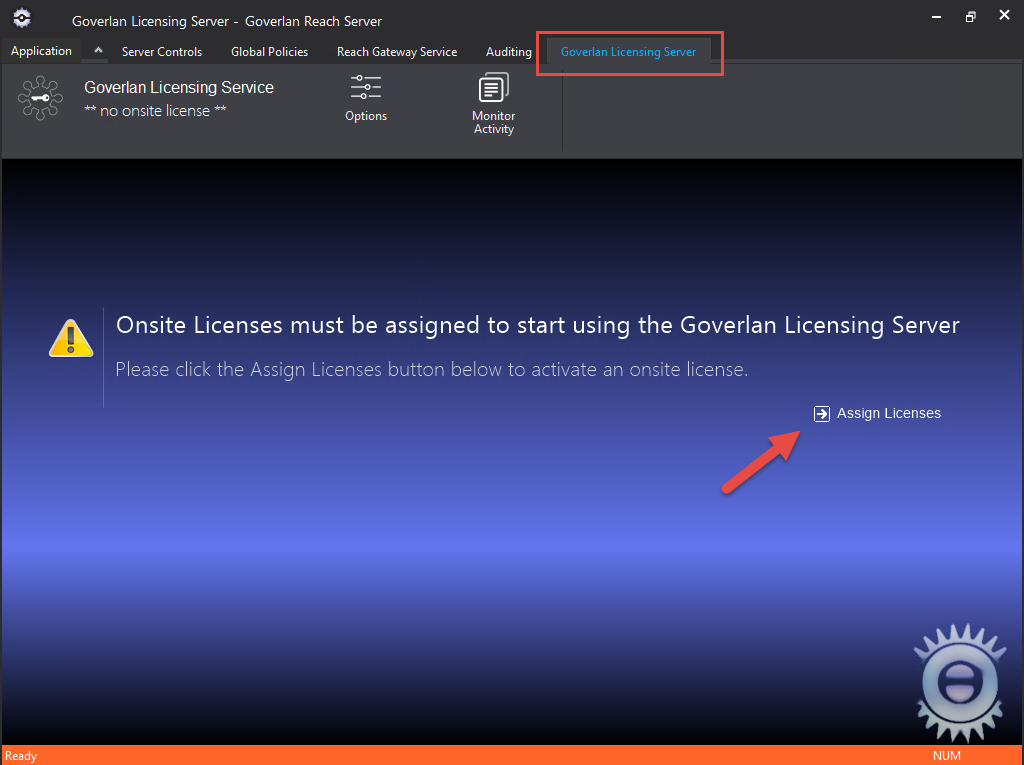 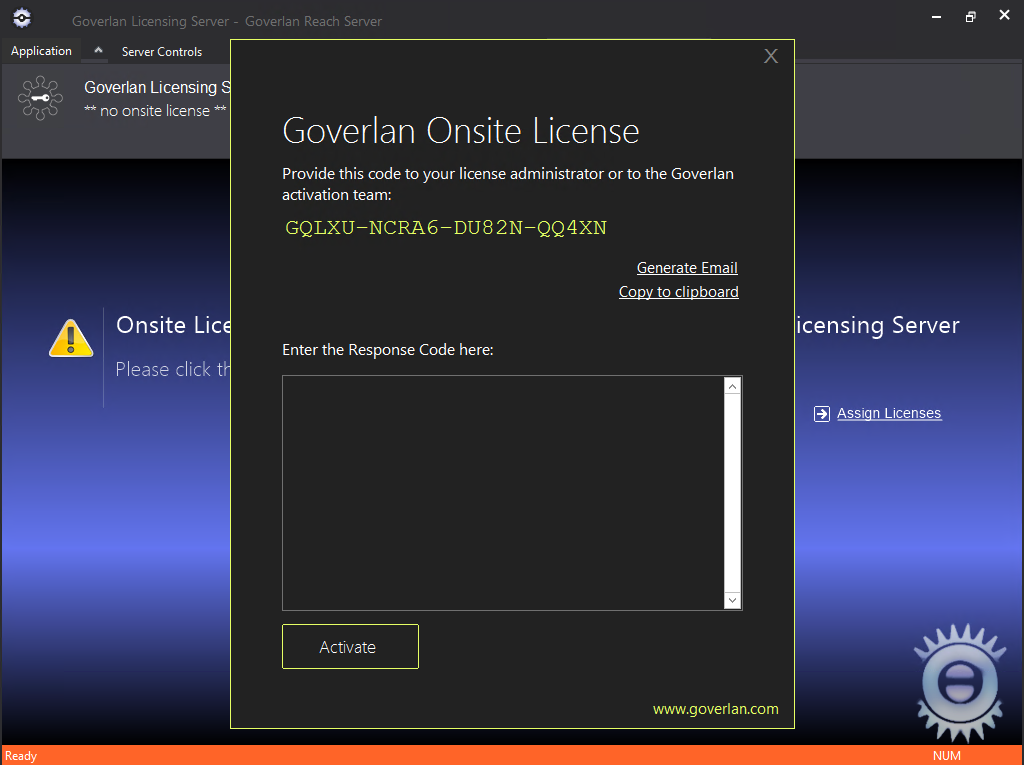 Log on to the my.goverlan.com portal, select the Goverlan Server tab and click the Set as onsite licensing server button: 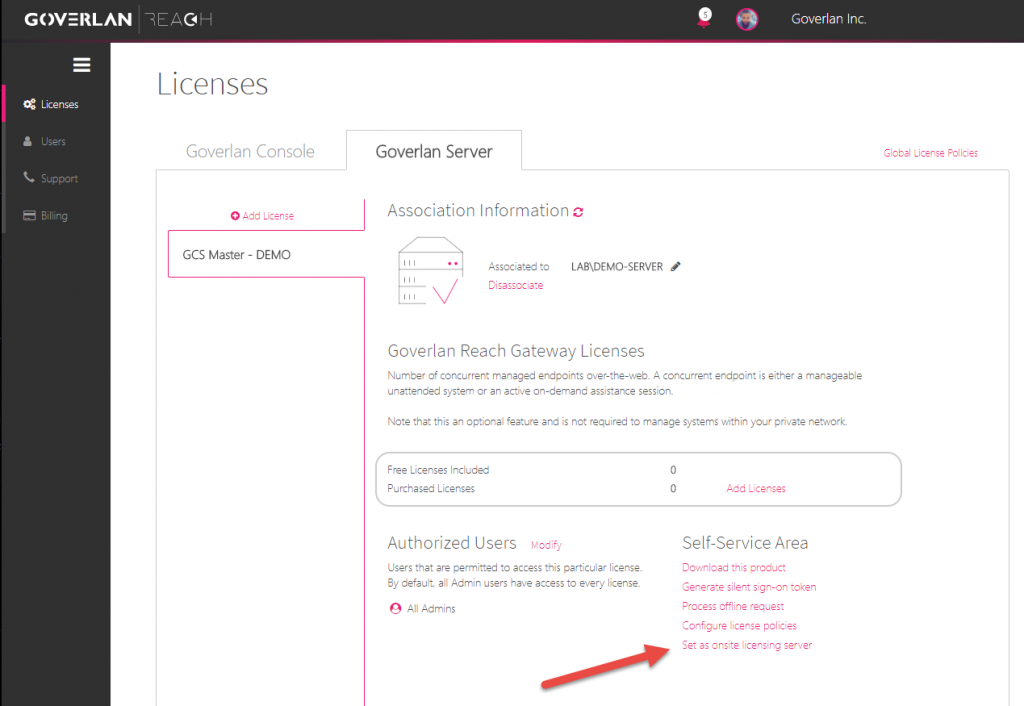 You will now be prompted for the Goverlan Onsite License code from the previous step: 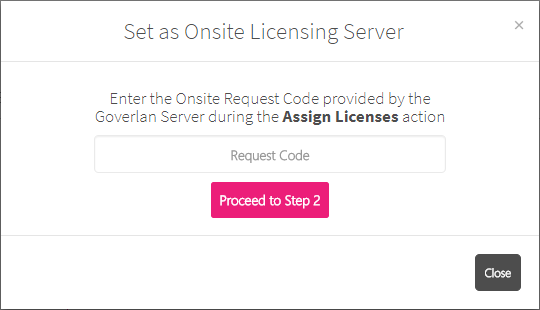 After entering the code, you will be prompted to select the pool of licenses you’d like to reserve for the onsite GLS: 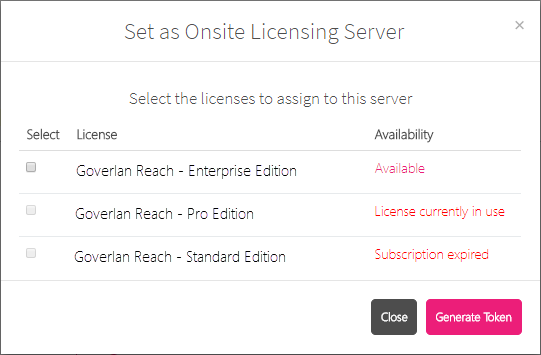 Licenses that are currently in use or expired will be unavailable. All licenses from the pool must be un-allocated before they will be available for Onsite activation.

Multiple licenses can be selected, for more information refer to the Assigning Multiple Licenses Section below.

After clicking on Generate Token, the Response Code will appear: 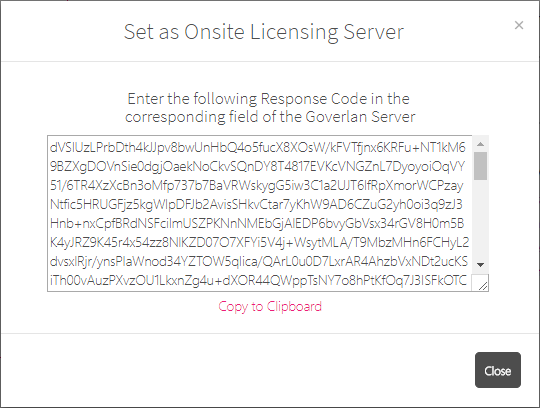 Click the Copy to Clipboard and paste this code in the Goverlan Onsite License prompt window on the Goverlan Reach Server. After clicking Activate, the server will show the following screen: 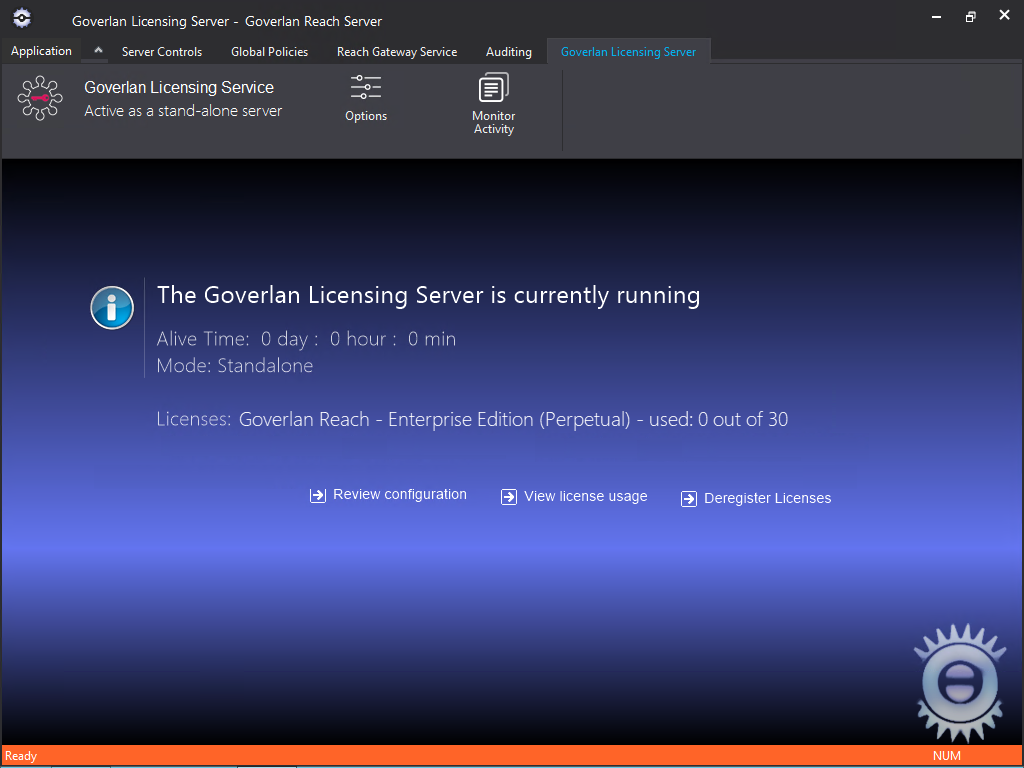 The my.goverlan.com portal will show the following information on the licenses that are being used for the Onsite Licensing Server: 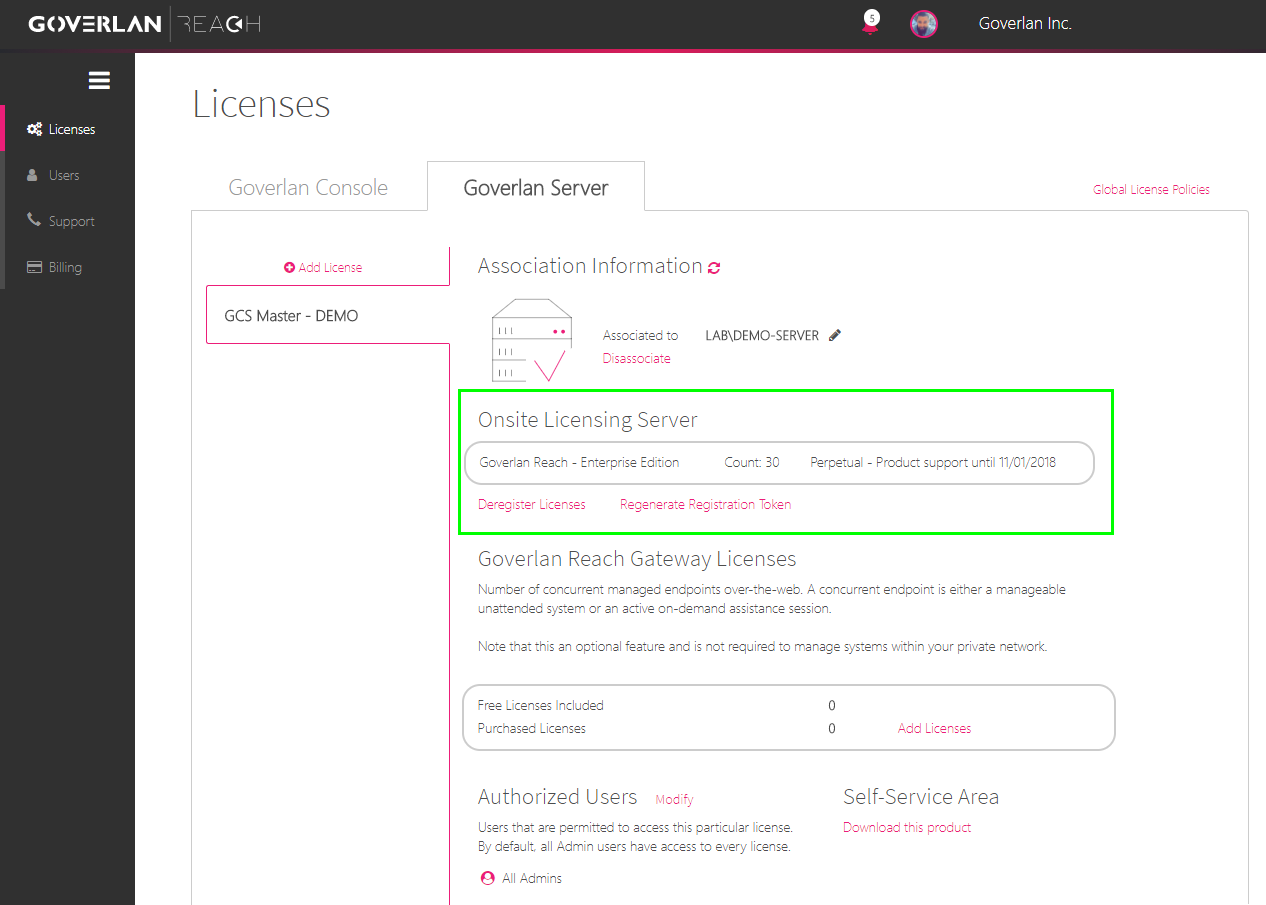 Multiple licenses can be selected to be distributed by the Onsite GLS.

The Goverlan Licensing Server tab will show a live view of all licenses that are in use: 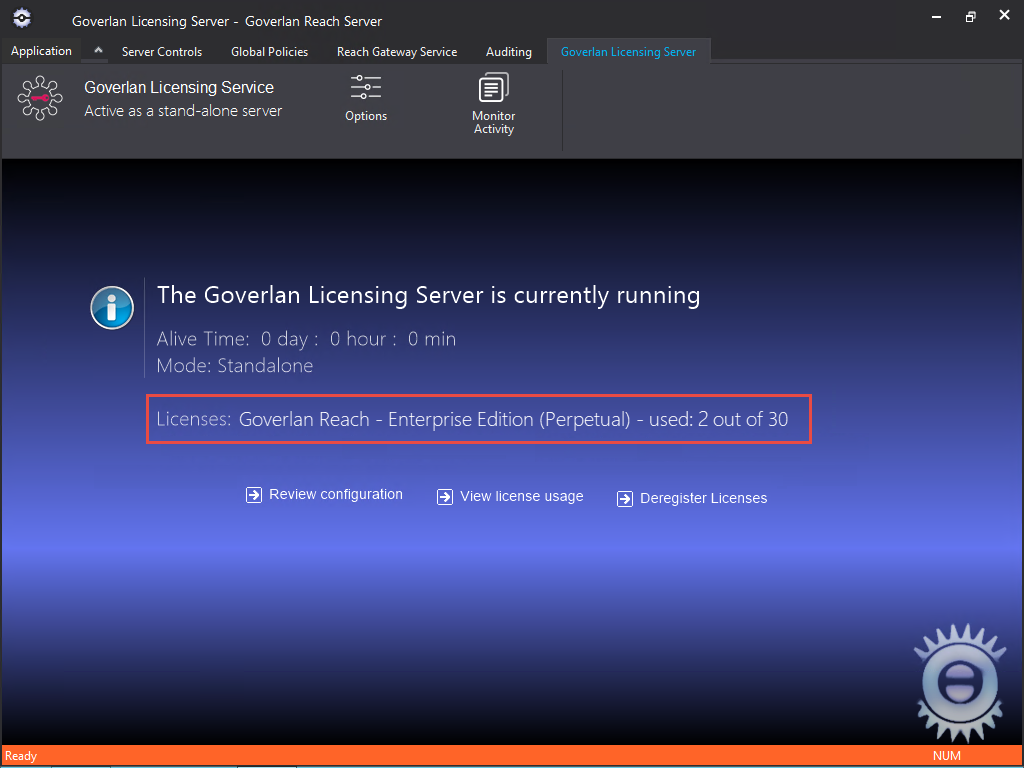 Clicking on the View License Usage button will open the License Usage window. Here you can view all information pertinent to the Goverlan Reach Consoles that have licenses in use:

Since Goverlan Reach Consoles are in Floating Mode, licenses can only be released via two methods:

If new licenses are purchased or if the Onsite Goverlan Licensing Server needs to be migrated, you must first deregister the license pool currently activated on the server. 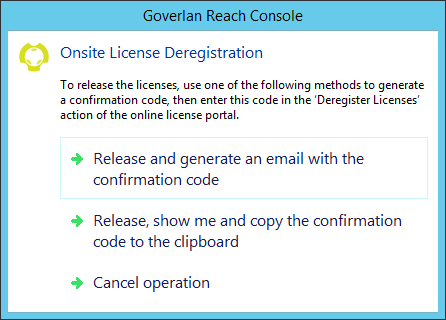 If the Goverlan Reach Server does not have an email client installed, click the second option: “Release, show me and copy the confirmation code to the clipboard.”

After selecting one of the release options, the confirmation code will be shown: 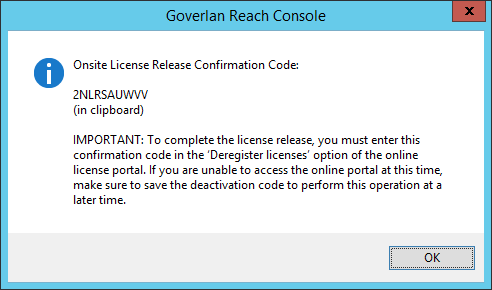 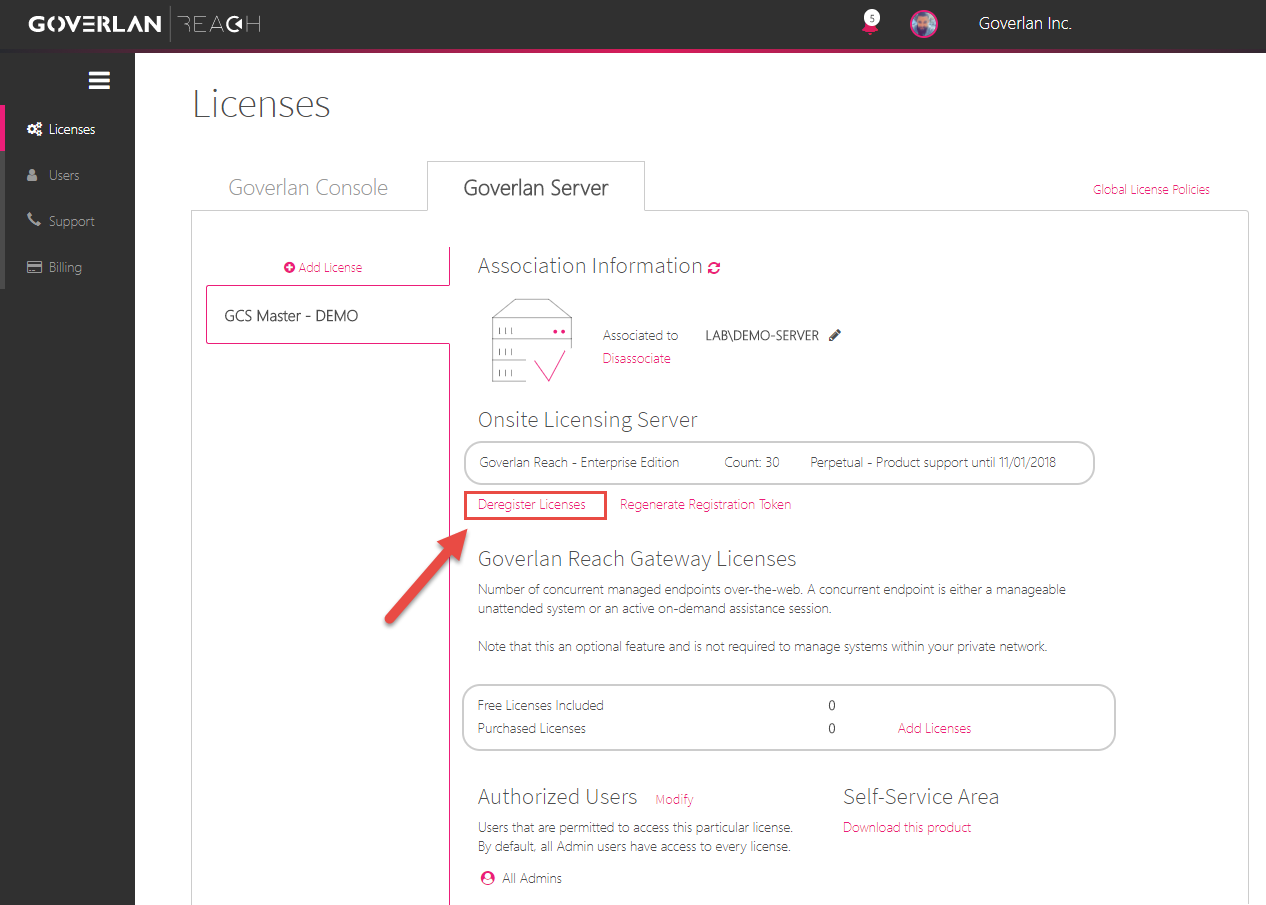 The my.goverlan.com portal will show a pop up requesting the code acquired from the Onsite Licensing Server from the previous step:

After entering the code, the portal will confirm that the licenses have been successfully released.