Save time in setting up. Watch this 3-min implementation overview video

The operator console exposes all services of Goverlan Reach:

Install the Goverlan Reach Server if you need:

You can access your product installations at any time through the Goverlan Client Portal: my.goverlan.com. Use the Goverlan account user ID and password sent to you during the creation of your product licenses.

The Goverlan Reach Operator Console runs on Microsoft Windows 7 ( 64-bit only) or Windows Server 2008 R2 and above. The default installation of the Goverlan console doesn’t have any external dependencies and you can start using it within minutes.

When you launch the Goverlan Console for the first time, you are prompted to log in using your my.goverlan.com ID and password: 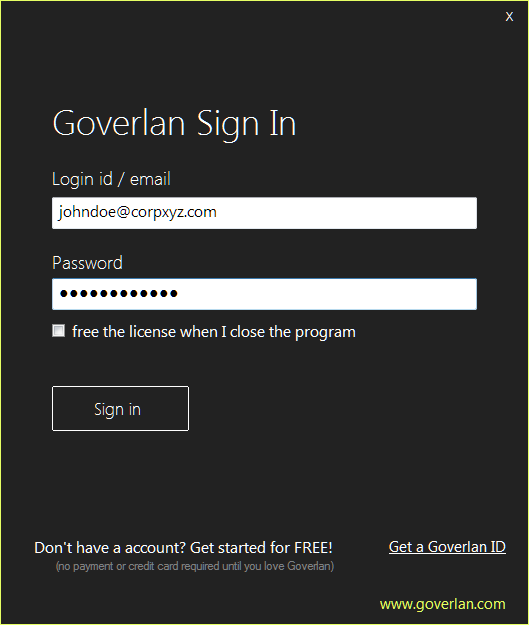 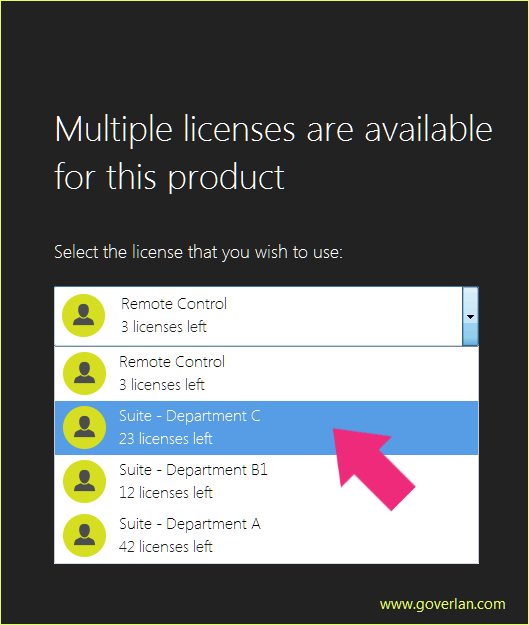 The name of each license owned can be customized by an account administrator (see Renaming Licenses).

How does License Distribution Work?

Your Goverlan account can be configured with as many users as you need. You can create Standard Users (only used to sign-in to the software and access downloads), and Admin Users (used to manage licenses and license users).

A license is allocated every time you sign-in to the software.

If you are using Goverlan within a Citrix or MS Terminal Services farm environment, you must select free the license when I close the program to avoid duplicates in license consumption.

Upon the first start of the Goverlan Reach Server, you must sign-in to associate your server with a license.

The Goverlan Reach Solution is an on-premises offering and doesn’t depend on a cloud infrastructure to run. However, Goverlan licenses are distributed and managed from the cloud (for environments where internet access is restricted, we also offer an on-site license distribution service using a Goverlan Reach Server).

The Goverlan Client Portal at my.goverlan.com is used to:

See the My Goverlan Portal user guide for further information.

The Goverlan Reach Client gives Goverlan Consoles the ability to manage any device regardless of its network location. The client agent is very small, stable and secure. It is automatically installed and managed by Goverlan on machines within your organization.

Goverlan Reach has the unique ability to query the logged-in workstations of your users in real-time. Using the fastConnect technology, you can access a user’s machine by Active Directory user ID only. Goverlan automatically discovers where the user is logged-in and presents you with machine information for quick support and management.

This feature may not immediately work as it requires the Goverlan Client Agents and the Goverlan Reach Server to function correctly.

Already a client that is migrating from v8 to v9? Take a look at our Goverlan v9 to v10 Migration Guide.

Can't find the answer you're looking for?
Contact Support