You may want to give a user on your network the ability to initiate remote control sessions while they are not admins on the remote computer.

The Goverlan agent must already be installed on the target workstation.

Depending on your organizations security policy, you may also need to add the Goverlan Remote Control Admins Group to the Local Security Policy\User Rights Assignment\Allow access to this computer from the network.

To authorize non-admin users to use remote control, you have two options.

Create this security group anywhere in your AD structure. The group must be a “DOMAIN LOCAL SECURITY GROUP.” 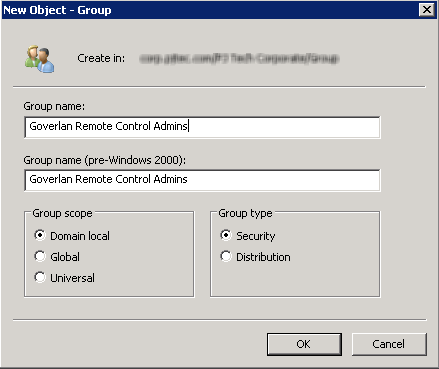 Add user accounts to it for any user you wish to have the ability to initiate remote control sessions.

This will allow anyone who is in the group to initiate remote control sessions to any machine on your network.

Create this security group directly on the local machine. Add users to this group from the domain who should have the ability to control that specific workstation.